A few decades ago Irish children would every year collect basket-loads of highly nutritious hazel nuts, mushrooms, nettles and blackberries from hedgerows, meadows and woodlands to bring home to their moms to make cakes, soups, jellies and jams.
Harvesting the wild flowers, fruits, herbs, fungi, roots and leaves of the forests has been integral to the fabric of humanity since our species first appeared on the planet.
It is only over the last few decades that as a result of technology development, in the form of refrigeration, mechanised transport, chemical fertilisers, intensive agriculture, urbanisation and the growth in supermarket shopping, we have lost an understanding of the seasonality of food, of the important of sourcing food locally and of the natural edible resources that exist in our local woods, hedgerows, seashores, rivers and meadows.
Disconnect with Nature leads inevitably to habitat destruction and the extinction of species.

However, there is in the last few years increased involvement by the general public in growing food 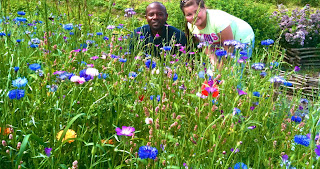 locally and organically, precipitated by an increased awareness of the dangers being brought about by man-made climate change. Terryland Forest Park is part of this grassroots movement and supports a very successful neighbourhood community organic garden.  Planting native Irish fruit trees, herbs and wild flowers in an enclosed garden is an important preliminary step before re-wilding the countryside by planting forests and natural meadows.
Over the last year, Conservation Volunteers organised a series of bramble berry and mushroom picking expeditions so that ordinary people could once again enjoy the pleasures of outdoor foraging that are so good for both the mind and body as well as putting us back in touch with the sights, sounds and smells of Nature. 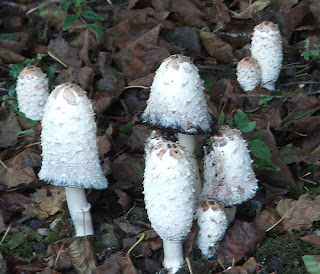 However a few principles need to govern those harvesting wild food.

Bramble Jelly Jam
Blackberries or brambles are probably the most popular wild food still collected.  These bushes are easily available and inhabit hedgerows, waste ground and woodlands across Ireland. As well as containing numerous plant nutrients such as dietary fibres and minerals that are essential for maintaining good health, fresh blackberries are a great source of vitamin C which is a powerful natural antioxidant.
The berries are used in jams, tarts and desserts. 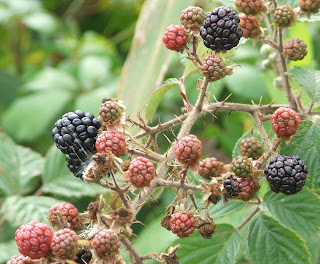 Gathering
The fruit forms in the July-October period. Initially green, the berry can be picked once it turns black.

Ingredients
450g (1lb) of blackberries
450 (1lb) of sugar
Juice of one lemon (As a source of pectin, it is the setting agent to keep the mixture together)
Butter

Preparation
Wash the berries and then place into a large heavy-based saucepan. Add 175ml of water. Cook gently for 30 minutes
Lower the heat. Simmer for 15 minutes. Pour in the sugar and lemon juice. Stir over a very low heat until the sugar has completely dissolved. Raise the heat, bring to the boil stirring at intervals for up to 12-15 minutes or until the sugar has completely dissolved.
Remove from the heat, skim off any excess scum, then stir some butter across the surface (this helps to dissolve any remaining scum). Leave for about 15 minutes so that the fruit can settle. Pour into sterilised jars, label and seal with covers.


Mountain Ash Jelly
The jelly made from Rowan berries is a delightful accompaniment to red meat.
The Mountain Ash tree produces a lovely white flower in late May to early June.
The berries first appear as yellow in June, change later to orange and are a fully ripe red from late September.
Rowan berries are an important source of food for birds during the  late autumn to the early winter period. 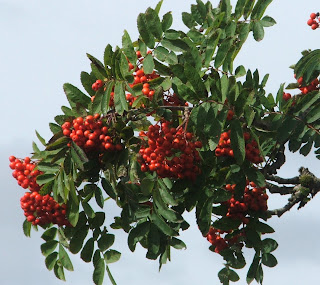 Low in calories. High in Vitamins A & C, dietary fibre, iron and calcium.

Take the berries off their stalks, place in a large pan and cover with water up to 75% of the fruits' level. Bring to the boil, then simmer for 20 minutes or until the fruit is soft.
Allow to drip through a muslin cloth or jelly bag either for four hours or overnight.
Measure the juice and weigh out the correct amount of sugar. You need 450g  sugar for every pint  (c500ml). Add the juice and sugar to the cleaned preserving pan, and simmer over a low heat for 10 minutes until the sugar has dissolved.
Increase the heat and cook for 5 minutes stirring gently, then test for a set. When the jelly has reached setting point, pour into hot sterilised jars. Then seal and label.


Spring Nettle Soup
A highly nutritious plant rich in vitamins A and C, as well as iron and other minerals.
Young Spring nettles make a lovely thick soup. When out foraging, pick only the young leaves as the older ones tend to have a bitter taste. Use gloves to avoid being stung. 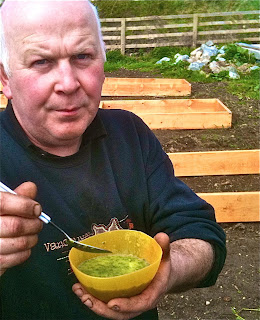 During the cooking, the boiling destroys the formic acid in the nettles thus making them perfectly safe to eat.

Preparation
Place the nettles in a heat-proof pot.
Pour boiling water over the nettles. Allow them to sit for 30 seconds, then drain, allow to cool slightly and discard any stems.
Chop up the leaves.
In a large pot, melt one tablespoon of butter over medium-high heat. Add onion and one tablespoon of salt. Cook, stirring occasionally, until onions are soft, about 3 minutes.
Add in the chopped potatoes and leeks and toss them in the butter until well coated. Season well.
Cover the pot and cook the vegetables over a gentle heat for 10-15 minutes, until the vegetables are soft but not discoloured.
Add nettles and cook until very tender, about 10 minutes. Stir in remaining 1 tablespoon of butter, pepper, and nutmeg.
Liquidise the soup, then stir in the cream.
Season to taste with additional salt and pepper.
Serve hot, garnish each bowl with sour cream or yogurt.


Hazelnut Cookies
The Hazel Tree is one of the most common of native Irish trees. Its fruit nut was used as a food by Mesolithic hunters, the earliest settlers to Ireland.
The recipe below is from the Epicurious website:
http://www.epicurious.com/recipes/food/views/Hazelnut-Cookies-109469 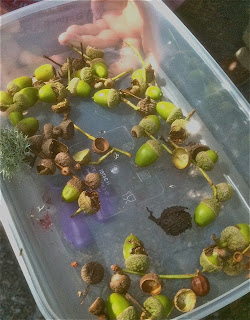 Toast hazelnuts in a shallow baking pan until fragrant and skins begin to loosen, about 6 minutes. Rub nuts in a kitchen towel to remove any loose skins (some skins may not come off) and cool to room temperature.

Pulse nuts and 1/4 cup sugar in a food processor until nuts are finely ground, then add flour and a pinch of salt, pulsing until combined. Add butter and pulse until dough just forms a ball. Divide dough in half, then roll dough on a work surface lightly dusted with sugar and flour into 2 (11-inch-long) logs (each about 1 inch wide). Chill, wrapped in plastic wrap, 1 hour.
Cut logs crosswise into 1/2-inch slices and arrange rounds 2 inches apart on 2 baking sheets.
Bake, 1 sheet at a time, until bottom edges just begin to turn pale golden, 12 to 15 minutes. Cool cookies on sheet 2 minutes. Place remaining 3 tablespoons sugar in a small dish and dip tops of cookies in it, then cool sugared cookies on a rack.