Importance of Insects to Forest Ecosystems
Insects (small arthropod animals with six legs and generally one or two pairs of wings) are probably the most important organisms in the forests and undertake a central role in plant reproduction, soil fertility, sustained forest health and diversity.
Trees are dominant in biomass, offering a habitat to so much of the world’s wildlife. However it is insects that are most dominant in terms of the biodiversity.
Around 80 percent of all trees and bushes are pollinated by insects. Many species of forest trees reproduce using wind pollination. But others invest a large amount of energy in producing nectar-filled blooms to entice pollinators. Examples of these are the Hawthorn, Blackthorn, Willow and Rowan Berry. The bees, wasps, flies, beetles and butterflies that are attracted to the flowers of the trees drink the nectar and eat the pollen. At the same time they inadvertently carry the pollen on their bodies to other trees and in the process pollinate their flowers, thus facilitating reproduction. 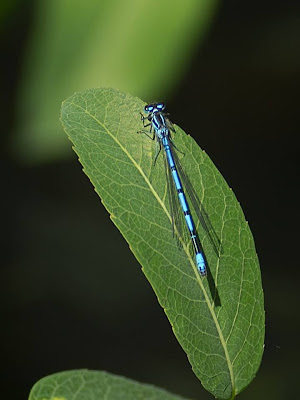 The Azure Damselfly is a common species of damselfly notable for its distinctive black and blue colouring. It often frequents vegetation near to water sources such as rivers and ponds. 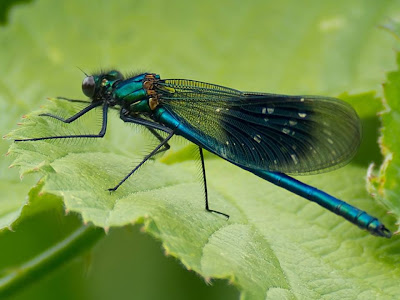 A large damselfly with a metallic blue or blue-ish green colour. The male has translucent wings with a broad, dark blue-black spot (or band) across the outer part.
Females lays eggs in aquatic plants.
This male damselfly is territorial. 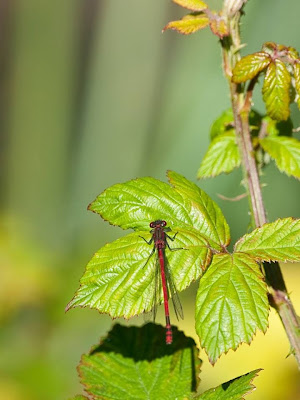 This damselfly inhabits the edge of ponds, lakes, canals and slow-moving rivers. It is a very common specimen and is often the first damselfly to emerge, usually in April or early May and is on the wing through to August.
The large red damselfly has black legs unlike the small red damselfly which as orange legs. 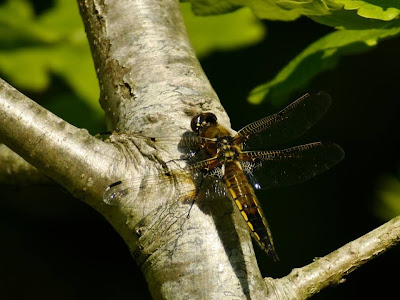 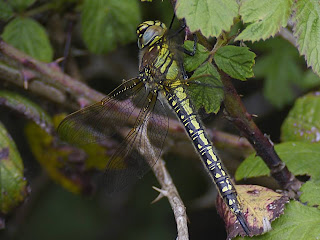 Hairy Hawker Dragonfly, as with all dragonflies, are normally found near rivers, ponds or wetlands because their larvae (nymphs) are aquatic. It gets its name from its hairy thorax. Feeds on flying insects and only flies in sunny weather.
Green and black in colour.
The Hairy Hawker's flight period is short and early, beginning in mid-May and ending in mid-July. After two years, the larvae emerges from the egg amongst vegetation close to water. 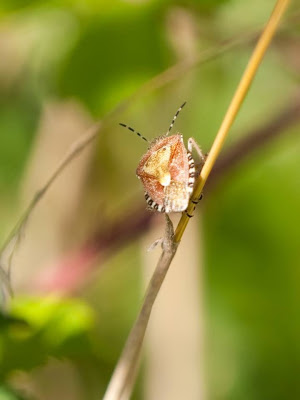 Hairy Shieldbugs get its name from the fact that its body is covered in tiny brown hairs.
The body is normally brown or maroon coloured, the shield-like structure (scutellum) is greenish with a yellow tip. The margin of the bug is black and yellow.
Hairy Shieldbugs are active from April to October. They eat plant sap and are found in hedgerows, meadows, parks and gardens. 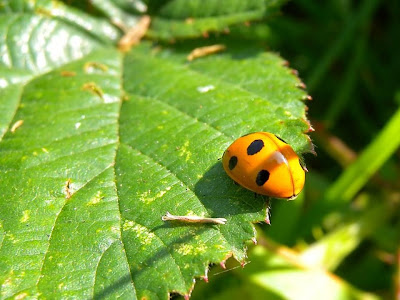 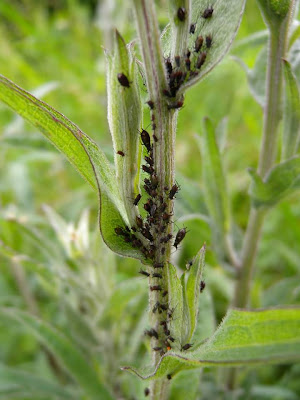 A tiny black insect with a broad soft body. During the spring and summer months they can be found in large numbers on the underside of leaves and on the growing tips of host plants. They have specialised piercing and sucking mouthparts which are used to suck the sap from the stems and leaves thus distorting shoots and stunting plant growth.
The primary host plants are woody shrubs. Eggs are laid on these by winged females in the autumn. The adults then die. The aphids that hatch from these eggs in the spring are wingless females that can reproduce asexually. 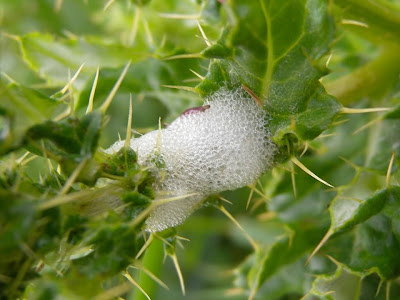 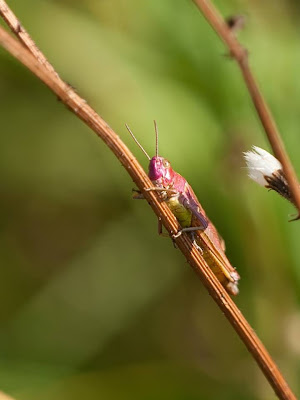 As its name implies, the Common Green Grasshopper is very common and widespread across Ireland.
Lives on and feeds off grasses.
The female lays eggs in the soil. The nymphs hatch around April the following year. They grow through several molts (shedding their exoskeleton) over a month until they are adults with fully functioning wings.
Each species of grasshopper has a unique chirp that can be identified. 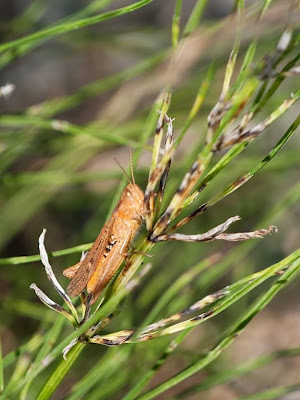 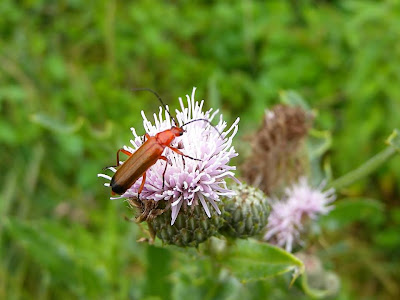 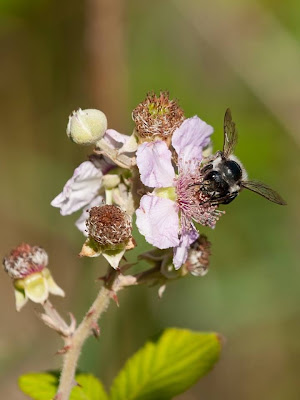 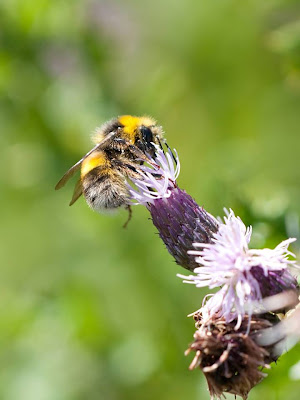 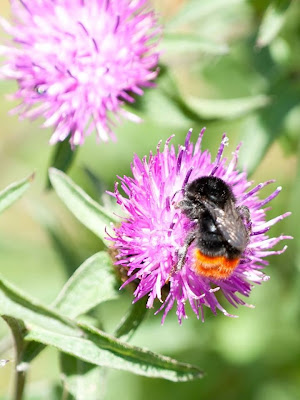 Red-tailed bumblebees are considered a threatened species in Ireland. They are mostly coloured black, though the hind-quarters are red or organish in colour. Males feature a yellow band on their chest. Their nests are built in walls, stable straw or in abandoned birds' nests. An typical colony consists of about 100 to 200 worker bees.
These bees are facing extinction in Ireland due to intensive agriculture practice and the over use of insecticides. 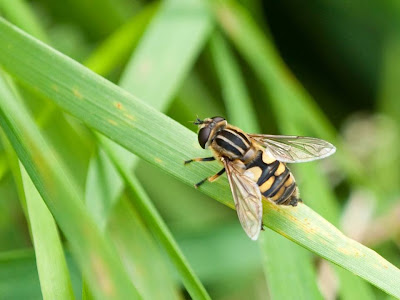 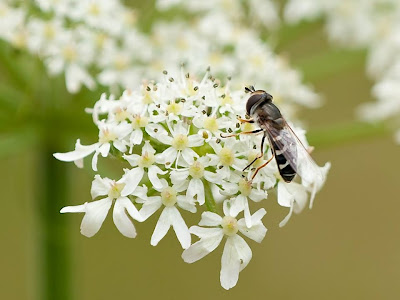 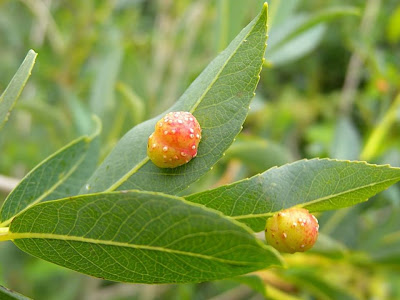 Female sawflies inserts her eggs in young willow leaves and injects a fluid that causes the formation of reddish, berrylike galls. One larva develops in each of these galls, which are globular or elongate and about 0.33 inch long.
They are considered a pest and can do serious damage to willow trees.
Home
Subscribe to: Posts (Atom)