A flower (Irish = bláth), also known as the bloom or blossom, is the reproductive element of the flowering plant. Flowers reproduce by a process known as pollination whereby the male pollen from the stamens or anthers of a flower is transferred to the female stigma of the same or of another flower.  Most plants need external help transferring pollen from one flower to the pistil of another which is commonly provided by insects including bees, butterflies and moths whilst they are eating or collecting the pollen itself or a flower’s sweet nectar. The wind can also act as a pollinating agent for many grasses and trees.


Flowers bring beauty and colour to our countryside. However the use of chemical fertilisers and intensive monoculture farming in the modern era has led to a collapse in the numbers of native wildflowers which has impacted negatively on the insect populations that feed off them as well as the rest of the interlinked organisms of an ecosystem such as birds, mammals and ultimately humankind.
Since time immemorial, different types of flowers have symbolised different human emotions and are an integral part of many cultural and religious ceremonies.  The Rose symbolises Love; the Lily the 1916 Easter Rising; the Poppy those who died in World War One and the Daffodil represents hope and new life. 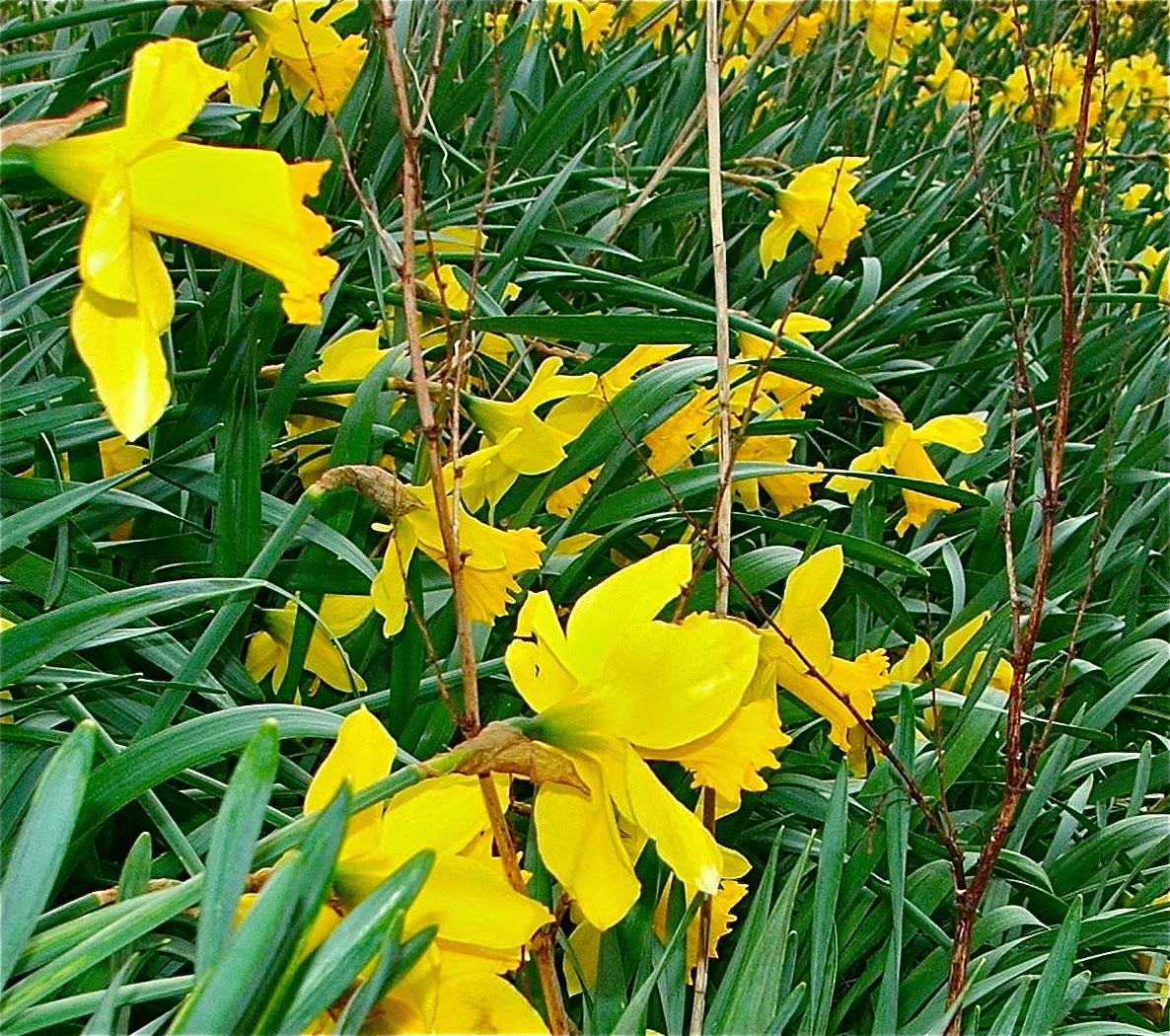 One of Ireland's most popular flowers, its blooming represents the coming of Spring as the plant covers roadsides, gardens and fields with carpets of gold.
As a woodland plant, it tends to bloom before the leaves grow on surrounding trees so as to capture the light from the sun.
The daffodil has a trumpet shaped centre surrounded by a ring of petals.
Most daffodils in Ireland have yellow petals though some have creamy coloured petals with bright orange trumpet centres. 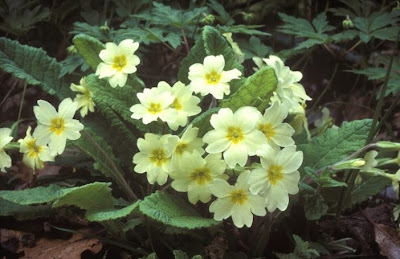 Flower symbolising the beauty of Fairies & Female Saints.
The Primrose is a  native perennial plant that favours damp soils in woodlands, hedgerows, meadows and roadsides. It normally blooms in February to May with scented flowers. In some sheltered locations, it can bloom as early at December. Its early bloom may explain its name ('primus' = first in Latin). Stalks grow to 15cm.
Like so many other native wildflowers of spring such as lesser celandine, daisy and daffodils, the primrose's colour gives a wonderful yellow hue that contrasts sharply with the green of its leaves and that of other plants growing across the woodland floor.
In February it was used to decorate churches in honour of St. Bridget and in May to populate alters dedicated to the Virgin Mary. It was also made into 'posies' by children to decorate houses, to ward off evil spirits and, in the process, fill homes with its beautiful aromatic scent. 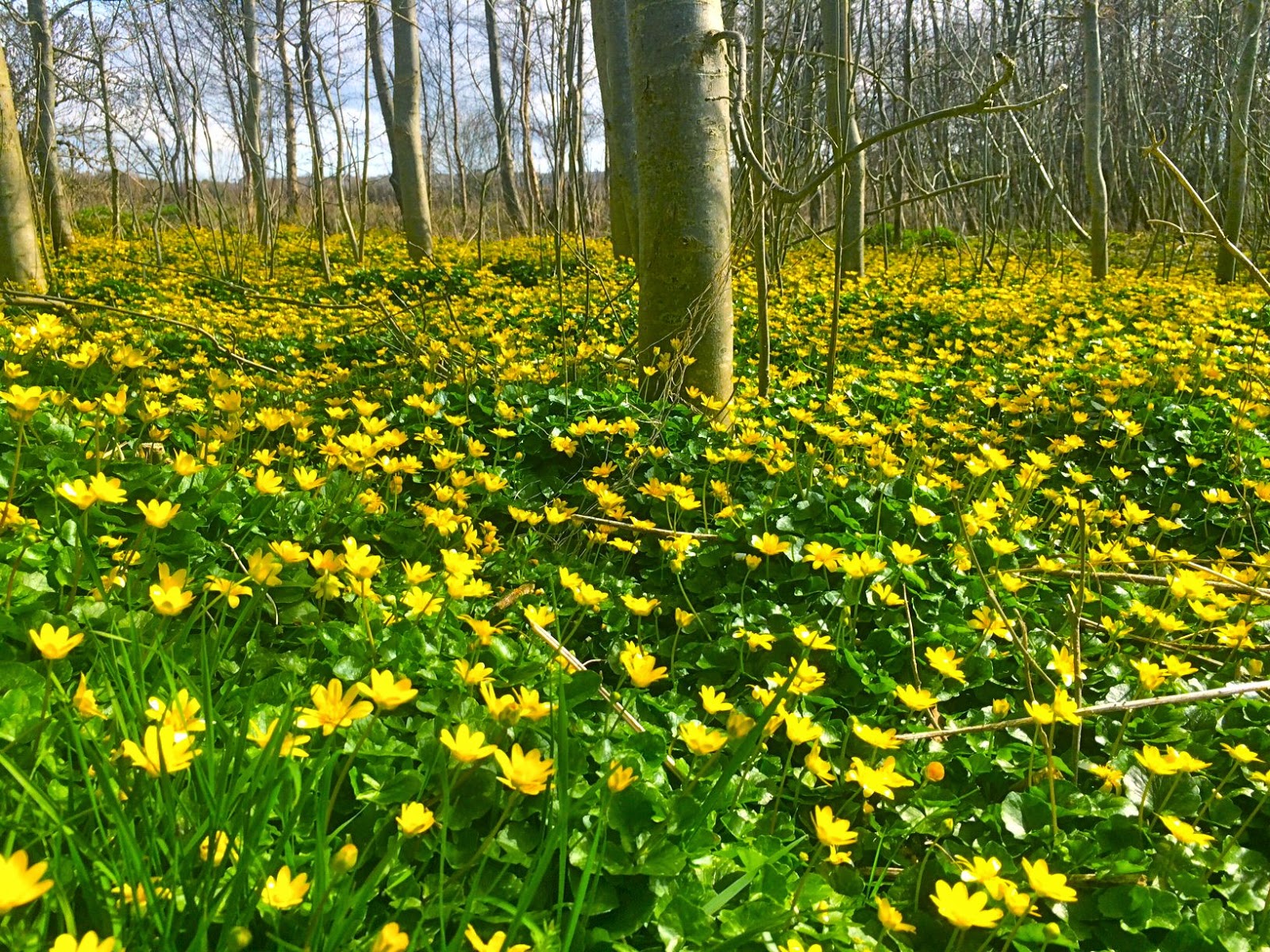 The Gaelic name for celandine Grian which translates as "Sun" is apt as its shape and colour is reminiscent of a burst of solar rays.
In traditional herbal medicine, the plant was recognised as a cure for sore throats, piles and haemorrhoids. 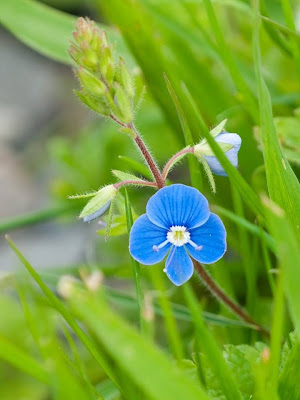 Germander Speedwell is a common native grassland flowering plant.
It has pale blue-mauve flowers with a white centre and deep blue veins. possessing pale green leaves and hairy stems. Height: 10-30 cm.
According to 'Wildflowers of Ireland', the plant got its name from a tradition amongst seafaring folk of giving travellers a little bunch of attractive blue flowers whilst wishing them 'Speed Well'. 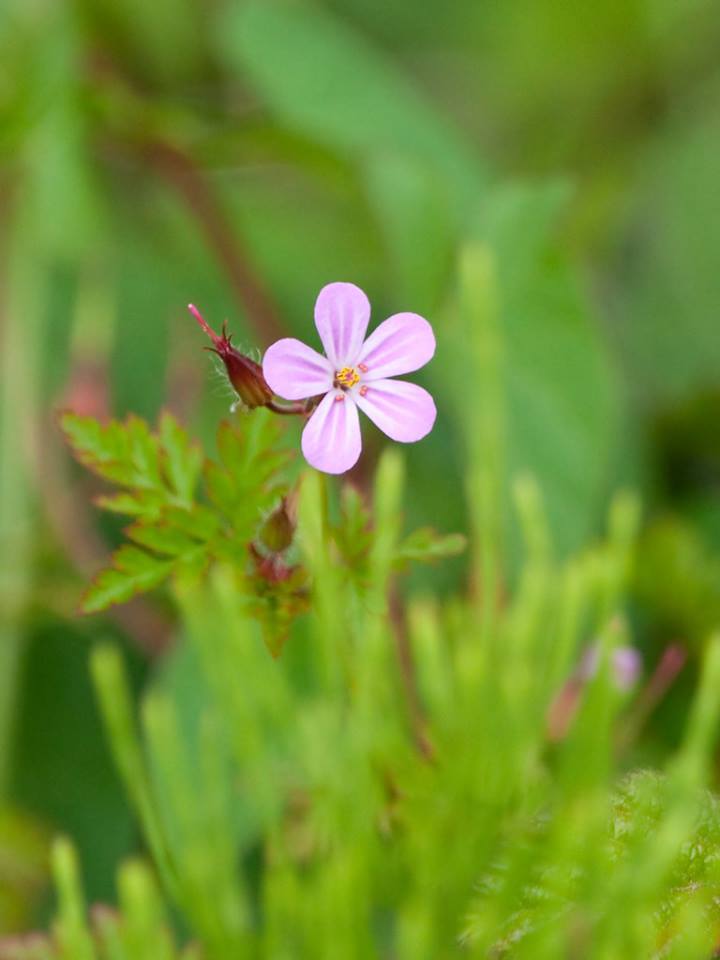 Can be found in limestone rocky outcrops, walls and shady places. Its pink flowers have five petals and in the centre of the flower are orange anthers.  The hairy, stalked leaves are often tinged red and have three to five deeply cut lobes.  The fruit is hairy and beak-like, hence the name for this group of plants- cranebills.  The stems are pale green. 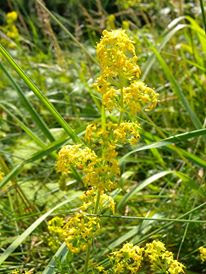 A common perennial plant in Ireland and is found on grasslands and on grassy sand dunes and along coast roadsides The plant flowers in June/July-August/September period.
The small flower comprises four-petals with the surrounding eight to twelve leaves narrow and pointed
Height: 15-60cml.
The fruit of the  Lady's Bedstraw is a two-lobed green capsule which later blackens.

The plant was used in older times in healing wounds and stopping nosebleeds, to curdle milk, colour cheese and was used as a natural dye to colour sheep's wool red.
The name comes from the Christian belief that it was used by the Virgin Mary ('Our Lady') as bedding in the manger of the baby Jesus in Bethlehem. In fact it was indeed commonly used as stuffing for mattresses or bedding in times past. 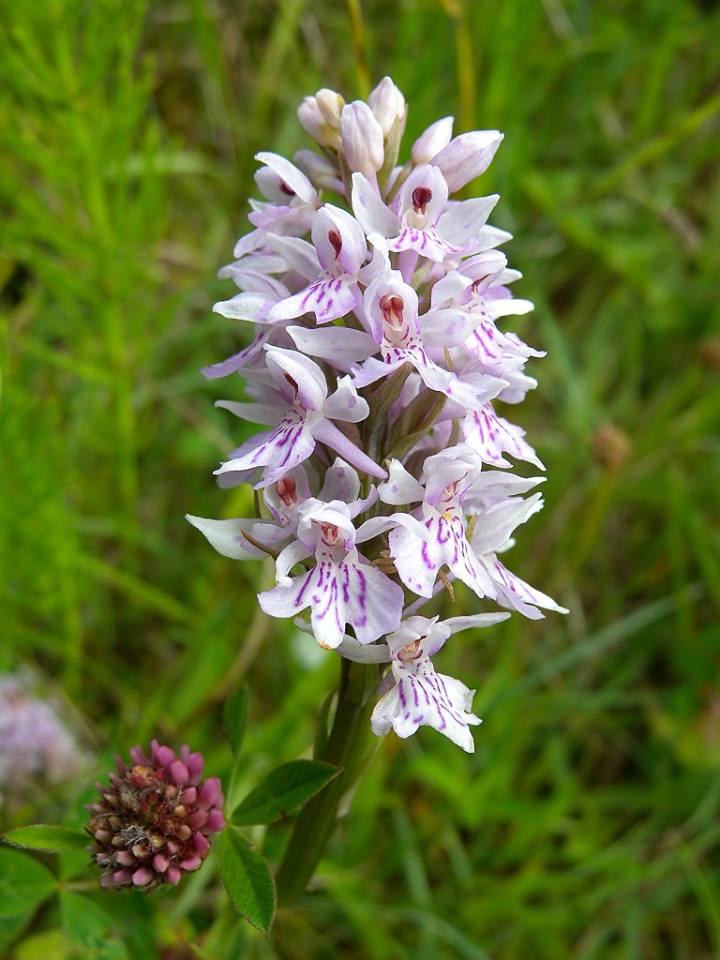 One of our most common orchids if you know to look in moist grasslands that have not been fertlised. Orchids are all in fact quite rare and should not be picked.
Blooms- May-August. Tuberous perennial.
It has pale-pink to white flowers, with purple spots, streaks. Flower spike conical, becoming cylindrical. Three lobed lip, pointed lobes.
Soils: Neutral or calcareous.
Habitats: Varied- marshes, grasslands, woodlands, roadsides, dunes, quarries and waste grounds. 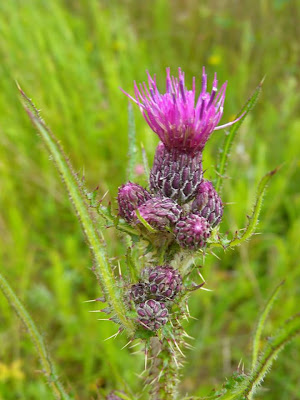 Common plant on wet ground and in marshy fields as its name implies. This species has deep flower heads and very short spines that are often tinged with purple.
Different members of the thistle family have important medicinal value such as improving blood circulation and for the treatment of liver complaints 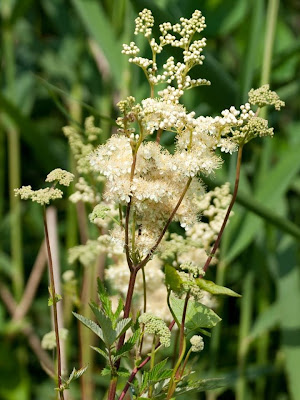 Meadowsweet is a common Irish wild flower found in damp areas such as near to rivers, streams and in wet meadows. The creamy coloured flowers grow in clusters emitting a sweet fragrance aroma that gives the plant its name. When dried it has an even stronger smell of hay.
Flowers between late June and September.
Interestingly though its scent of its flowers attracts bees, hoverflies and many insects, it produces no nectar.  The visitors come to collect the pollen, which is a nutritious food for bee larvae. Strangely too the fragrance of the leaves is quite different from that of the flowers. 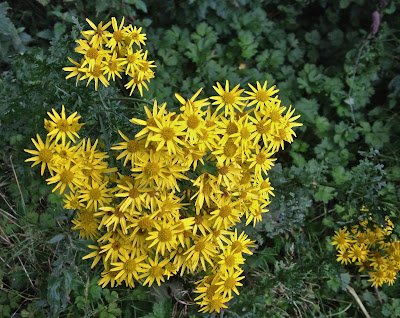 The very attractive native Ragwort is a highly poisonous plant if eaten and thus presents a real danger to farm livestock such as cattle and horses. The poisonous substances in ragwort are toxic alkaloids which causes the liver to accumulate copper, causing sickness and death.
The plant does not really tolerate well maintained pasture lands and is normally is found instead along hedgerows, roadsides and uncultivated grasslands.
Ragwort is a biennial plant, meaning it grows from seed and remains in the rosette stage for the first growing season. In the second year it produces its trademark golden yellow flowers. Flowering normally takes place in late summer
The plant can grow to one metre high. Each flower-head has between 12 and 24 ray florets and a centre of disc florets or tiny tubular flowers like the daisy. 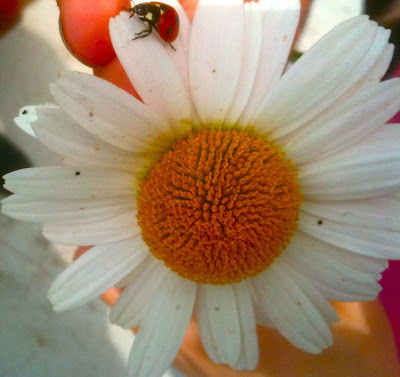 The pretty and ubiquitous daisy is a very common flower that can be found almost everywhere.


Its centre is yellow in colour, from which grow long, delicate, oval shaped white petal-like structures. In fact the yellow cluster comprises tiny tubular flowers and looks like a sun surrounded by a halo of white shining rays. Important for insect life as it grows in early spring (March) offering a early supply of nectar. It blooms until October.


The word daisy comes from  Old English ‘daeg’ (day) and ‘eage’ (eye) meaning ‘day’s eye'. The plant unfolds its flower at the dawning of the day, and closes it again as light fades away at dusk.
A popular past-time for children until recent times was the making of a daisy chain or necklace by stringing together multiple daisies.  A stalk is split by a finger nail, then the next flower is slipped through until the head meets the split and so on until there are enough flowers linked together to make a crown or necklace. 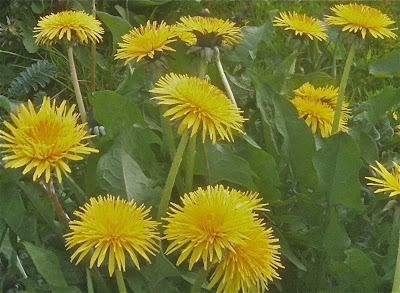 The name comes from French 'dent de lion, meaning "tooth of the lion", referring to the coarsely toothed leaves.
A member of the daisy family, the Dandelion has distinctive large golden flower-heads which are also clusters of tiny flowers and toothed leaves. It was the symbol of St. Brigit.
The dandelion was recognised as a very important herbal and food plant up until the last few decades. In earlier times, the dandelion was recognised as a very important herbal and food plant. Containing vitamins A, B, C, and D, as well as minerals such as iron, potassium, and zinc, it was used as a cleansing agent for the body and for a variety of ailments including liver complaints, upset stomach, bowels, gall stones, hemorrhoids as well as for jaundice (root) and warts (sap).
The flowers can be made into dandelion wine, which has a reputation as an excellent tonic, and the dried roots, when roasted and ground, make an effective natural substitute for coffee. 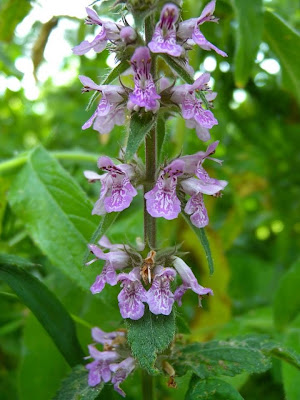 As its name suggests, this plant can be found growing in wet places such as near rivers, streams, marshy meadows and ditches.
This hairy plant has light purple labiates’ flowers arranged in a long spike terminating at the stem, usually with six flowers in each whorl. The leaves when crushed have a very strong unpleasant smell.
Wort is an old English word (original wyrt) often used in the names of herbs and plants that had medicinal uses, with the first part of the word denoting the complaint against which it was under in the treatment off (e.g liverwort, lungwort). So the name Woundwort signifies that the plant was used in the treatment of wounds. The leaves can be applied to a wound to stop bleeding and heal the wound. It is used in modern herbal medicine plant for its antiseptic and antispasmodic properties.
Its tubular roots are edible.

Non Native
Fuchsia
Fiúise
A South American species that was introduced originally into Ireland for the gardens of the Anglo-Irish gentry, the Fuchia has since the mid-19th century become a very common hedge plant and give a lovely red colouring to the roadways of Ireland from July to October.
The red flowers are bell-shaped with have four violet petals encircled by four large, pointed red sepals. In south America, it is pollinated by humming birds.
Found growing along the lake side of the Dyke Road, just outside the boundaries of the Terryland Forest Park. 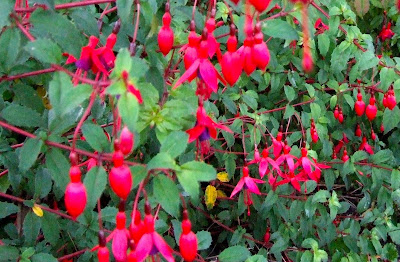 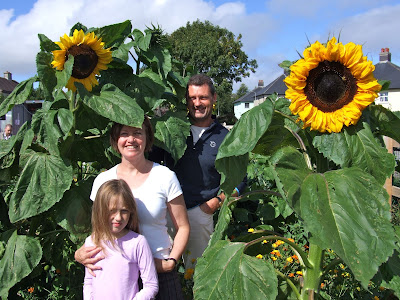 Whilst not a native Irish plant, the Sunflower is cultivated in the Ballinfoile Mór Community Organic Garden located in the Terryland Forest Park. It is very popular with children gardeners because of its height and the large size, circular shape and predominant bright yellow colour of its flower which is used to symbolise the sun. Its flower-heads are like those of the daisy; the central dark disc is made up of hundreds of tiny tubular florets; the outer rays are also tubular at the base, but with a strap-like 'ray', that is like the ray of of the sun.