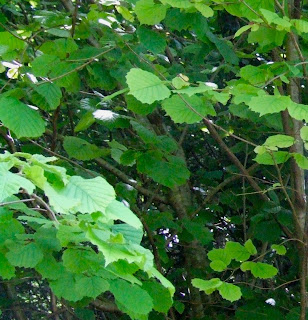 Symbol of Magic, Wisdom & Poetry
The male flower, the catkin, appears in early Spring; the nut from August onwards.
In Celtic mythology, the tree is associated with magic, wisdom and poetry. Its fruit- the hazel nut- was a great source of nourishment in ancient times. Its wood was used for making furniture, hurling(fencing) and wickerwork.
Druid wands were made from hazel. Because the tree grew near water, it also has strong connections with fertility. It was believed too that the source of Ireland's most scared rivers, Shannon & Boyne, were to be found at wells guarded by hazel trees whose nuts would impart great knowledge and magical prowess to those that eat them.  Its twigs were used by diviners to locate water underground. 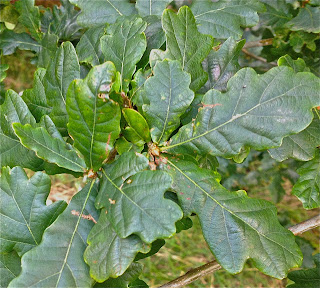 The Oak tree is the most majestic of all Irish trees and was an important building material used to construct buildings, ships and furniture.
It symbolised strength  and kingship.

Its acorn fruit was a popular food for humans and wild and domesticad animals particularly pigs.

Its importance in ecology terms cannot be overestimated as it can support up to 450 different types of wildlife. 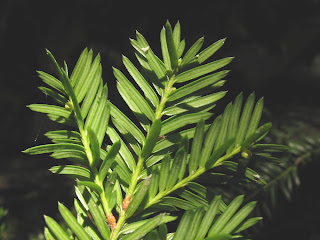 The Yew was and is planted in graveyards, churches and other sacred places. Its longevity and poisonous leaves probably gave it its association with death, the afterlife and immortality. Yews in such holy areas were never cut down as it would only bring bad luck to any who attempted to do so. Yet the Yew was often used as a substitute for palm leaves on Palm Sunday where it was brought home after  Church service and pinned up in the home to bring luck.
Foliage consists of pointed dark green needles. Male flowers(yellow) and female flowers(green) are found on separete trees. Female flower matures to bright red fruit. 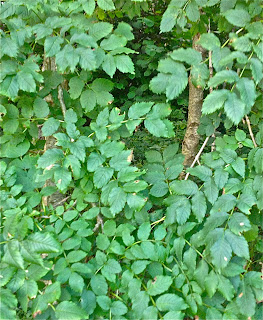 Symbol of Water and Fertility
Most famous today in Ireland for its use as a stick (camán) in the game of hurling.

Used in ancient times to make spears and fences as well as in manufacture of boats, buidlings and furniture.

In Celtic Ireland, it was revered as a sacred tree, was associated with water, holy wells and the fertility of the land.
Used also to make wands. 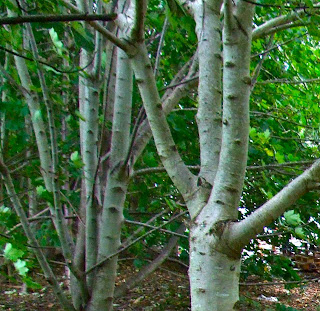 Has a distinctive silver bark. Its fine appearance and the fact that it is often the first tree to colonise new ground might have given rise to its associations with birth, rebirth, love and youthfulness.

Used to protect people and mile from evil spirits.

Linked to Aonghus, the Celtic god of love.

Its twigs were used to make brooms and the bark used for tanning leather. 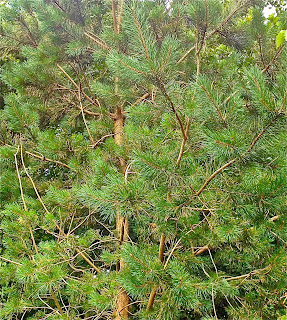 Scots Pine's characteristics of being evergreen and having a wood that gave off a strong white flame due to its resin secretion with its invigorating scent meant that it was associated with rebith and eternal life. Hence pine, particularly bog pine, was used on Christmas Eve to provide blazing log fires and candles to symbolise the birth of Christ and the promise of renewal and immortality.

Pine resin was also used to make a pitch for caulking boats. 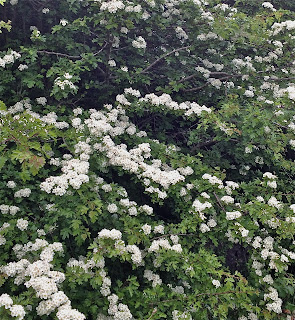 Associated with the fairies, the hawthorn or whitethorn was oftentimes feared by Irish people and in many parts of the country was never brought inside a house. The remains of prehistoric dwellings known as Fairy Forts dot the Irish landscape and are usually evident by the presence of clumps of hawthorn bushes.  Solitary hawthorn trees can also be seen in many farmed fields in rural Ireland. In both instances, local people would never cut them down lest bad luck would befall them.
Yet the tree with its white blossom symbolised Maytime and the arrival of Summer as the season of fertility and growth. A Whitethorn branch would be decorated with ribbons, pieces of cloth and flowers.
As with the ash, it was also associated with holy wells.
By September, the pollinated flowers become lush red fruits known as haws.
The April leaves were used as a green salad in sandwiches. Jelly was made from the red berries. 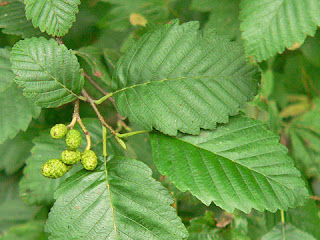 Extensively planted in the Forest Park the Alder is ideal for the damp habitat which was characteristic of this area until 2000. In Celtic mythology, it is associated with water spirits.
Used from ancient times to make shields and bowls. Its wood changes from white to red when cut, which reinforces its symbolic connections with blood, war and death.
Some therefore feel that Alder is the ‘branch’ in the Red Branch Knights of the Ulster Cuchulainn tales.
Leaves are bright green, rounded with shallow teeth.
Produces Catkins 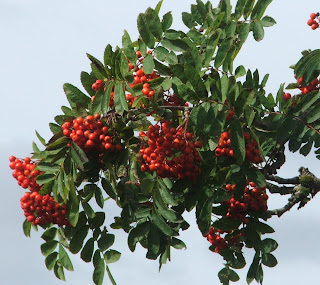 Its white flower appear in May whilst its distinctive flaming red berries appear in August.
To the Ancient Celts, the Rowan had a  formidable life-giving female magic. Wands were made from it. It symbolised too the power of fire and the coming of summer (May) was celebrated by the festival of Beltaine when livestock were driven between two bonfires made of rowan trees. Because of this strong association with life and female power, St. Brigid (of the Eternal Flame) with her perpetual fire at her sanctuary of Kildare is linked to the Rowan Tree.


Holly
Cuileann
Symbol of Purification & Warriorhood
Due to its ever green leaves and red berries,  the Holly is associated in Christian and ancient Celtic mythologies with purification. 'Holly' comes from 'Holy' as its winter scarlet berries symbolised the blood of Christ. Hence, homes were decorated with the lush green and red holly at Christmas, a custom that still continues today. On St. Stephen's Day, boys went house to house with a dead bloodied wren tied to a holly bush. People were often ritually beaten with the prickly holly until they bled to signify cleansing. 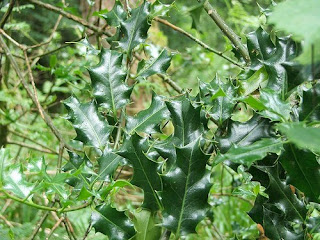 But in the pagan Celtic period, the holly was identified with warrior prowess, the god Lugh and the August harvest festival of Lugnasa. The latter was a time of chariot racing and holly was used in making chariot poles as well as in the manufacture of darts and spears. In the Táin, there are many references to the tree and Cuchulainn, Lugh's son and the greatest of all Celtic warriors.
Leaves are stiff, spiny and feel leathery. Red berries ripen in autumn. 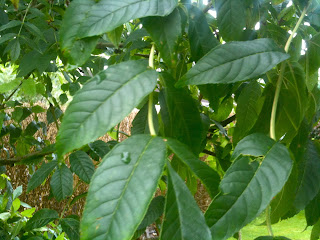 Due to its' pliability and the quick growth of its branches and stems, the Willow or Sally Tree was for millennia a very important renewable material in the making of farming and domestic products.  In Ireland, it was the main element in the craft of wickerwork, which is the interwoven of twigs or stems for the manufacture of light but sturdy items such as baskets, lobster pots and furniture. It was also used with hazel in making wickerwork fences and buildings.
Celtic Harps, the traditional symbols of Ireland, were usually made from Willow. The Brian Boru Harp, the most famous of all Irish harps and which is on display at Trinity College Dublin, was made thus. From the 16th century onwards, the Willow came to be associated with jilted lovers and this may example the connotations of the title of the William Butler Yeat's poem 'Down by the Sally Gardens'.

Because of it fast growth and because of its proximity to water, the tree came to be associated with fertility.

Gorse
Aiteann
Symbol of the Fertility of the Land

Gorse, Whin or Furze (Irish = Aiteann) is a very common bush characterised by sharp green spines and yellow flowers with a very strong fragrance that normally bloom in April and May. 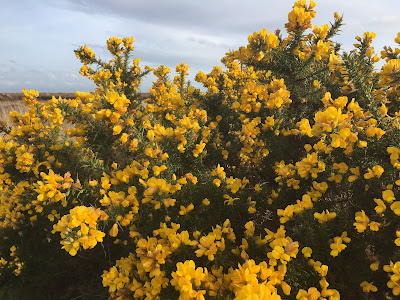 It is most often found on low quality grounds and thrives along the rough ground on the River Corrib side of Terryland Forest Park. My friend Maírtin O'Ceidigh reminded me of the old saying, "Lovers will stop kissing when the gorse goes out of bloom”. Because it grows on poor soils and can survive droughts that means never!
It was in former times extensively used as food, bedding and shelter for livestock during the autumn and winter. Gorse flowers are edible and can be used in salads as well as to produce an alcoholic beverage.

In Ireland the bush served as the traditional fuel for the bonfires of Oíche Bealtaine or May Eve (April 30). In the Celtic calendar, May 1st was the first day of summer and was celebrated as the festival of Lá Bealtaine (Beltane) and marks the midway point between the spring equinox and the summer solstice. In the Irish language, the word Bealtaine translates as the month of May.
Gorse was also placed around milk, butter and beds to ward off fairies.