A series of walks through different localities within the Terryland Forest Park. The walks are available as MapMyWalk  mobile apps.

Start/End point: At the foot of the embankment near the Woodquay entrance to the Plots on the Dyke Road. 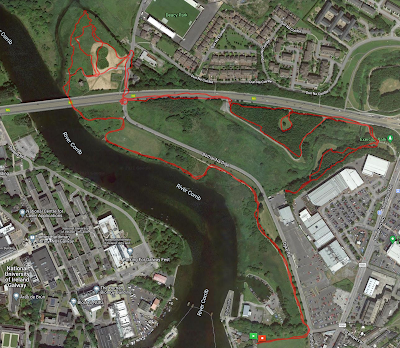 ‘The Plots’ sports playing pitch takes its name from its former role as an area of ‘allotments’ for the growing of vegetables by local population. The road takes its name from the construction of a dyke during the mid 1840s much of which was built as relief works during the great Famine (An Gorta Mór) with the stone quarried from nearby Terryland and Coolough.

The trail follows a route along the pathway on top of the dyke wall, pass Terryland Castle, the southern tip of Jordan's Island, a Celtic spiral maze made of yew trees that were planted in 2006,  onto a footbridge over the Terryland River opposite the lovely but abandoned Victorian-era Waterworks, before reversing to go under the Quincentenary Bridge to climb up the steps to enter the Terryland Forest Park from the Quincentenary Bridge Road. Circumnavigate this section of the park before retracing one's steps to return to the starting point at the Plots.

Start/End point: Park gate entrance between Dunnes Stores and the traffic junction on the Headford Road as it goes over the Terryland River.

Surface: Mainly Tarmac but earthen and grassy at the end of the Liosbaun section. 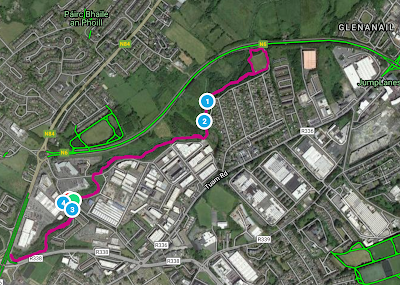 The trail is on a route along the banks of the Terryland River, through the park’s Extinction Trail, over the old 19th century bridge on Sandy Road, on through the Ogham (Tree Alphabet) Trail and around the sports field near Riverside.

There is a kissing gate at the start which is a problem for people in wheelchairs, with buggies and on bicycle. The trail crosses a road twice (Sandy Road and Liosbaun Road).

The trail goes around the woods planted in 2003, takes in two wildflower meadows and a large grass field that is popular as a picnic area. It also offers a lovely view of one of the last of the city’s traditional thatched farm cottages and of pasture lands where farm animals graze.

Start/End point: Terryland Forest Park gate entrance beside the traffic junction on the Headford Road and adjacent to Currys store in the Galway Retail Park.

The trail goes through the grounds where c3000 volunteers turned up on Sunday March 11th 2000 to plant the first trees in Terryland Forest Park. All the trees planted in this park are native Irish. The first feature on the walk is the Outdoor Gym populated with a range of exercise equipment. The marshy grassland on the left of the entrance used to be the site for the annual erection of a large lights-covered Christmas Tree in the early 2000s.

Taking the path to the left one passes woods that were planted in 2014-2016 with a range of native wildflowers, wild garlic and bluebells being the most prominent.

At the end of this stretch lies a most beautiful bubbly little brook in a stream that flows into the Terryland River.  Turning back towards the Quincentenary Bridge Road, one passes over a bridge that was the site for could have been the first canal constructed in Ireland. In the 15th century Galway Mayor Lynch attempted to have a canal built to connect Lough Atalia to the Corrib River so that sea-going vessels could sail up to the towns along the shores of shores of Lough Corrib such as Oughterard and Cong. Unfortunately it was never completed. The Terryland River is unusual in the sense that it is tidal and flows out of rather than into a large body of water (body). Before the Dyke Road was built it was much more extensive and flooded a lot of the 160 acres that today forms the forest park. In this stretch of the river aquatic birds such as heron, kingfisher, coot, mallard and moorhen can be seen. Pass the bridge lies a large meadow planted in 2012 which contains a myriad of wildflowers such as cowslip, bee orchid and knapweed. As well as the trees, the woods here contains daffodils, foxglove and wood sorrel.

The large round grassland in the middle of the woods is known as Druid’s Grove. It is defined by a circle of oak trees with one solitary oak in the centre. Was laid out to serve as an outdoor spot for small musical and fun events especially for children.


Note:
A larger version of the Terryland Forest Park catchment area providing detailed information on flora, fauna and social history can be accessed by clicking here

Rural Trails that could connect into Terryland Forest Park

Galway possesses probably the most traditional rural landscape of any city in Europe. This is particularly true of the Dyke Road – Menlo catchment area that connects the wetlands of the River Corrib to the Terryland Forest Park as well as to the farmlands of Coolough, Menlo, Carrowbrowne and Castlegar by a way of a network of old rural tracks known as ‘boreens’ that formerly served as the transport arteries for the once largely farming population of the district up until the middle of the 20th century.

Its boreen, meadow, woodland and riverine habitats, as well as having castles, farms, religious sites, pre-famine settlements and other built heritage assets, feature an abundant biodiversity that comprises thousands of wildlife species from native wildflowers such as the marsh woundwort to raptor birds such as kestrel, mammals such as the red squirrel, fresh water creatures such as shrimps and to small pollinators such as the white-tailed bee.

As well as the hub for this ambitious boreen trails network, it is expected that the Dyke Road will become the starting point for the Connemara Greenway by rebuilding the bridge on top of the old railway pillars; the Corrib could become an ecological corridor of international importance for wildlife; the abandoned Waterworks could become a Forestry/Waterways interpretative centre complete with café, gallery, bike hire shop and Men’s Shed crafts workshop; and the Terryland Forest Park could be transformed into an Outdoor Classroom for schools of all levels.

Surface: earthen with some parts gravelled. Not really suitable for cycling.

Start/End: Gate Entrance (either side)

The route takes one through a bog located a few hundred yards from the old graveyard in Carrowbrowne. 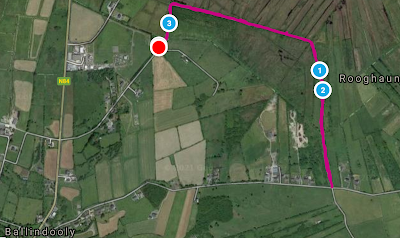 The landscape is wonderful mainly comprising peatland covered with gorse and channels and ditches full of water.

Surface: Tarmac in parts, earth, grass and gravel in other parts.

Please note that a considerable section of this route is not suitable for wheel chair users or for cycling. In fact bicycles could damage the pathways. 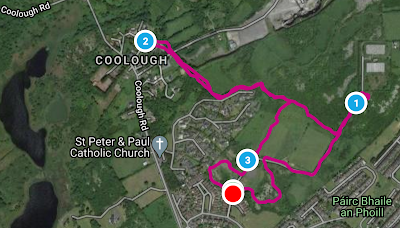 The route offers some of the most picturesque landscape views, Burren-type rock outcrops and traditional rural boreen trails available within walking distance of the city.

Beginning at the park entrance in Crestwood Park, take the grassy path to the right through a hill of karst limestone outcrops covered with hazel, hawthorn and blackthorn.

After coming down from the hill, walk pass the gaelic sports fields on the left and then take the path to the left and continue until one arrives to the top of Ballinfoile Hill where the mast (private property) is situated. Located at the This section route offers spectacular views unmatched anywhere else in the city of the Burren, Lough Corrib and Connemara. Turn around and walk until near the end of the woods and before the pitches. A small opening on the right is the start of probably the best most authentic boreen trail in Galway. The ground is rough and one has to be very careful not to slip in sections which can become very muddy when it rains. The boreen is bordered by traditional hedgerows and dry stone walls that form boundaries to small rural fields comprising rough uneven ground reminiscent of a bygone era. Near the end of the boreen there is a quite road crossing once thronged until relatively recently with noisy trucks loaded down with stone taken from the nearby quarry. At the small village of Coolough that has all the hallmarks of a pre-Famine settlement known as a clachan (Irish ‘cloch’=’stone’) walk as far as the thatched cottage (private property) before returning along the route back to Crestwood.